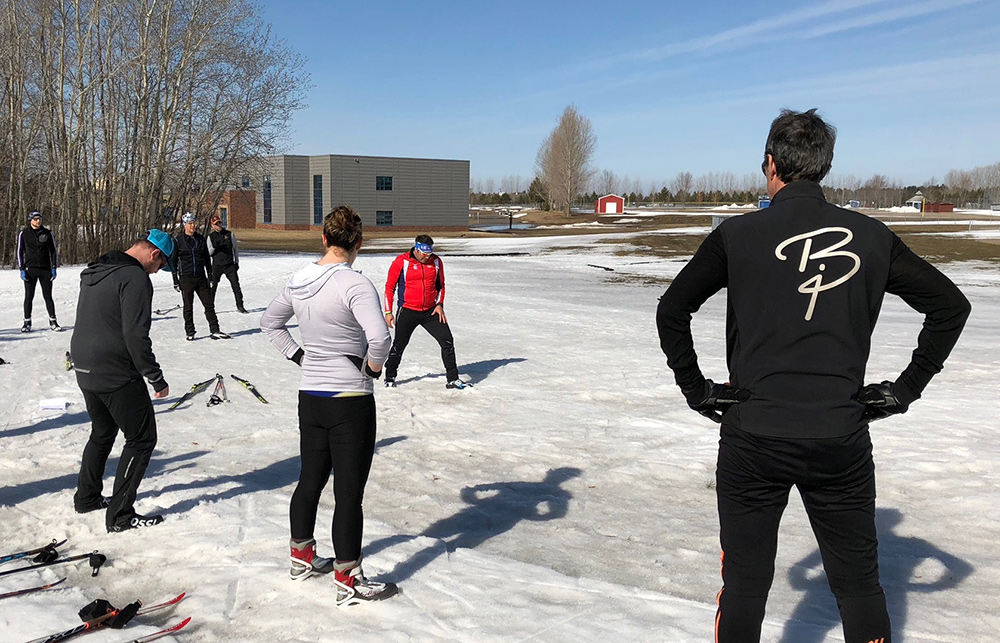 Mark the weekend of October 16-18, 2020 on your calendar for CXC Wayne Fish Coaches Conference and Certification.

We will aim to offer you a great program as always, including L100 material with the steps toward certification. For those already L100 certified, we will have a plethora of topics to help you think critically about your programs and the coaching you are doing. However, in these times, we will be going virtual. We will miss the face to face interaction with each of you, but hope that the ability to attend from home will be helpful for you and your colleagues.

As we transition, this fall our past one day clinics will have a new focus and timing. The one day clinics will be limited to the L100 in the field workshop with practical experience, which will now have an evaluation of your coaching portfolio and coaching skills and with respect to drills, technique, communication, etc. Feedback from the new portfolio step and in the field sessions has been that the two sections have become much more valuable. L100 is also no longer going to simply be a manual to read. It will be going to interactive modules. I suspect overall the time involved with becoming certified is going to increase a bit, but a certified coach should feel they have developed more skills as a result of the changes.

This fall, the route to L100 certification in the Central Region will be:

1. Purchase your CXC/US Ski & Snowboard Membership
2. Get green-lighted by membership:

- Sign Up for a Background Check
- Complete your Safe Sport Training
- Complete your Avalanche Training
- Provide proof of current First Aid/CPR Certification (you will need to take course on your own, we recommend looking at on-line options)
- Any other miscellaneous items membership items that may come up on your dashboard

- In the Field In Person Experiences will be offered after the coaches conference at sites in different areas of the region based upon L100 sign ups through the Virtual Coaches Conference.
- Evaluations will be completed post experience, shared with the candidate and sent to USS&S' education department.

Unfortunately, this fall L200 course is still being updated, and it will not be available until the curriculum update is complete. Once it is updated and goes to portions using online modules, etc. It will be able to be completed in different time frames than just at our fall Coaches Conference. The future route to L200 should look similar to the new L100 route. For those who were hoping to complete L200 this fall, please be patient and plan to join us for the great continuing education sessions.

We hope to have many of you join us for the Wayne Fish Coaches Conference.

If you have any questions, please feel free to reach out!

As we think about coaches education, we should all be aware that US Ski & Snowboard Cross Country Coaches Certification is undergoing changes to curriculum and platforms. At CXC, we are striving to continue to offer you opportunities this fall to enhance your coaching skill and knowledge through both the L100 certification option and for those certified we will have informative thought provoking continuing education presentations.

Includes:
- Level 100 US Ski and Snowboard On-Line Course Instruction
- Conference Presentations, and later access to the presentation recordings
- In-Person Coaching Skills Clinic (will include an evaluation)

* In-Person clinics will be scheduled at the end of October and November and offered after the coaches conference at sites in different areas of the region based upon L100 sign ups through the Virtual Coaches Conference. Evaluations will be completed post experience, shared with the candidate and sent to USS&S' education department.

Note:
We encourage to sign up early, get your membership green-lighted (Safe Sport Training and a Background Check), and begin/complete your on-line portions prior to the conference.

- Building a Strong and Integrated Youth Culture in Your Club

Sverre is a lifelong skier from Vermont, now perhaps most known as being Sophie Caldwell's dad. Cross Country skiing runs in his blood and is his family's "business". He grew up skiing with his siblings under the tutelage of his dad, John, a former US Ski Team Head Nordic Coach. He raced himself as a youth, junior and collegiate (Dartmouth), competing in skiing?s four events: slalom, giant slalom, jumping and cross-country early in his racing career. After college he began teaching and coaching skiing. In 1980 he joined the Stratton Mountain School, starting as its head Nordic Coach and working there in many ski coaching and leadership roles until his recent retirement. While at Stratton he also worked as a coach with the US Ski Team (Coaching at the 1988 Calgary Olympic Games). He has run countless youth and junior camps at SMS and was the visionary behind starting the SMS/T2 professional team. Through his work at Stratton, he has been named National Coach of the Year 3 times.

Sverre is a strong advocate for cradle to grave skiing and has amazing skill at engaging youth in a positive team atmosphere. His ability to educate and lead young skiers making sure they are having fun while moving through the proper developmental steps and learning their sport is a model to emulate.

- Building a Strong and Integrated Youth Culture in Your Club

Trond and his twin brother Knut grew up cross country skiing in Fauske, Norway. In the early '90s they came to the US as NCAA athletes at the University of Vermont. Trond was the 1994 New England Division I Collegiate Male Athlete of The Year across all sports. He was a 3 time All-American nordic skier, winning the NCAA Individual Classic National Championship in 1992. He was also a standout runner in cross country and track. Following graduation, he became the head Nordic Coach at Northern Michigan University. Following coaching at NMU, he joined the Denver University coaching staff until he became the US Ski Team Head Cross Country Coach in 2002. He has been coaching with National Ski Teams since, spending time in Switzerland (working with Dario Colongna among others), Norway (as the head Coach through multiple Olympic cycles) and recently in Austria. He continues to consult with a number of National Ski Teams and other ski programs. Some of his roles with the various national teams has been ski federation outreach to clubs with youth programing and running youth summer camps with 350-400 participants per summer.


- Practical Applications and Advice as the Racing World goes No Fluoro

Knut and his twin brother Trond grew up cross country skiing in Fauske, Norway. In the early '90s they came to the US as NCAA athletes at the University of Vermont. Knut was a 2 time All-American nordic skier who was also a standout runner in cross country and track. Following graduation, he became the head Nordic Coach at Denver University, and served as an advisor to the US Ski Team During his time there. In 2006, Knut joined the staff for the Norwegian National Ski Team, where he was Head of Race Service through the Pyeongchang Olympics. Knut is currently in Norway wearing many hats, working on Research and Development with the Norwegian Olympic Federation, leading a foundation working to give disabled people a better life through sports, and coaching youth/juniors in cross country skiing and track and field.


- Building a Strong and Integrated Youth Culture in Your Club

Emma Garrard has been a coach for Park City Ski and Snowboard Nordic Coach since 2013 and Cross Country Director since 2015. She was also a head coach for TUNA and a ski instructor at White Pine Nordic. Emma learned to ski in Alaska and went on to compete in both running and skiing in college at the University of Nevada. Emma was a professional triathlete for nine years.


- Practical Applications and Advice as the Racing World goes No Fluoro

Jacqueline Akerman grew up loving outdoor sports, she was introduced to biathlon in the mid-90's and has made the sport her career and passion ever since. Jacqueline is the Athlete and Coach Development Manager for Biathlon Canada. She has worked for Biathlon Canada in some capacity since the mid 2000's including as a coach for training camps and tours, Jr and Sr national teams, biathlon World and IBU Cups, OECH, YOG and WYJCHs. Previously Jacqueline coached a university biathlon team for 9 years, club programs, as well as provincial and national level teams and competitions. Jacqueline has an undergrad in Physical Education - Outdoor Pursuits and a masters degree in Coaching Studies. Among many roles and responsibilities with Biathlon Canada Jacqueline currently assists in coaching the Canadian Biathlon Development teams, is managing the advancement of biathlon domestic competitions, and leads the coach education program for biathlon in Canada.

A Twin Cities native, he had an outstanding career as an athlete in both cross country skiing and running, attending Northern Michigan University from 1988-91 where he competed in both skiing and running. As an athlete in U.S. Ski & Snowboard programs, he was a Junior Olympic medalist in the 1989 20k and a masters national champion in the 15k CL in 2004. Haggenmiller earned a bachelor of science degree from Northern Michigan in 1991 before going on to gain his juris doctor degree from the University of Utah.

Joe had a very successful career at Michigan Tech University (MTU) in Houghton where he coached cross country running, cross country skiing, and track & field. In his tenure there, he coached over 40 NCAA national qualifiers, 2 US National Championships Sprint Qualifier winners, 2 US National podium finishers, several Junior All Americans and seven NCAA All Americans. Additionally, Joe has coached three skiers on to Junior/U23 World Championships and two onto the USA Track & Field Junior National Championships.

In addition to his certification as a cross country skiing coach, he is also certified as a USA Track and Field coach. Today he continues his passion for skiing and his involvement in the central region's ski community with Central Cross Country Skiing, working out of Duluth, Minn.

Yuriy skied his first Birkie in 2002, motivating him to move to Madison. In 2005 he started the Madison Winter Festival, including the Capitol Sprints races around the State Capitol Building. The festival has attracted thousands to winter sports since its inception.

Yuriy is a level 200 certified coach with a bachelor's degree in cross country ski coaching and physical education with a minor in sports medicine.

In addition to his role at CXC, Yuriy has served on the U.S. Ski & Snowboard Cross Country Sport Committee since 2007 and has been a member of the American Birkebeiner Ski Foundation since 2012. He also serves on the Madison Nordic Ski Club and National Nordic Foundation boards. Under his leadership, CXC has been frequently recognized by U.S. Ski & Snowboard and U.S. Paralympics.


The primary purpose of coach certification is to work through an educational program that progressively builds on the coach's prior knowledge and experience. The process for becoming a better coach starts with foundational skills and moves forward into a deeper and broader understanding in all aspects of great coaching.

The U.S. Ski & Snowboard coaches certification program is a tiered system with each level building on the previous.


Each certification level has many common elements applicable to coaches in all sports, but are also tailored to meet the unique needs of each sport. If you have a question, concern or opinion you would like to share, please let us know.